In short, we were not impressed. Fast forward two years, we are less impressed.

Recent advertising chicanery provides Jason Bond another’black eye’ and we captured him red-handed lying about his affiliation with Harvard University.

Claims that in 5 short years, he’s earned over $26,000,000 million with his day trading penny stock mumbo-jumbo. But where’s the evidence?

A twitter feed that displays 100% winning trades. Day after day showing allegedly easy profits daily trading exceptionally doubtful penny stocks. No mention of ever losing money. Sure sounds “too good to be true.”

In my view, avoid this carnival barker.

In that review, it was detailed how Jason Bond Picks was essentially operating as a penny stock ‘front-runner.’ What does this mean? In a nutshell, Jason Bond issues Buy/Sell trading alerts in highly illiquid, penny stocks. Jason appears to be taking a position before he unleashes the Buy/Sell recommendations to his massive following of paying subscribers.

After the alert is issued, there is generally a mad scramble amongst the financial lemmings, only too willing to push the penny stock to ever higher or lower prices. As this fiscal insanity unfolds, Jason and his cohorts are too eager to dump their shares of almost worthless penny stocks on the’greater fool’, in my opinion.

Is this ridiculousness even legal? Yes. There are no regulations or protections that shield against fiscal stupidity. However, if Jason were a broker, or was being compensated by these businesses, this could securities fraud.

Many of these companies that Jason Bond recommends are highly suspicious at best, and outright frauds at worst. No buyer in their right mind would make a long-term investment in some of these firms. Hence the extremely illiquid nature of lots of the penny stocks that Jason Bond advocates.

However, if you’re able to cobble enough fools together to some day trading chat area, and you are able to convince them that you are some type of’Financial clairvoyant’ together with the power of divination, then many will throw themselves off a financial cliff in the sad hope of replicating the actions of the puppet master.

Jason Bond would love for you to believe he is some sort of financial wizard. He tells the quaint story of how he very recently was a humble gym teacher at a public elementary school. He was broke and desperate, and then he discovered the amazing world of penny stock day trading.

Since 2012, Jason Bond claims that he has now made $26,000,000 through his financial wizardry. How much of his story is true, and how much false? That is an open question. In my opinion, its hard to tell where the bullshit ends and the truth begins.

Since we don’t really know what is real, and what is financial mumbo-jumbo, we are forced to look at the clues that Jason leaves us. In my opinion, the marketing gimmicks that Jason Bond deploys is the greatest clue. It speaks of his credibility, candor, and honesty. Let’s take a closer look at some of Jason Bond’s recent marketing gimmicks…

In a recent promotional email to potential subscribers, as well as public Tweets, Jason Bond declared to the world…

“One of my greatest personal achievements was being invited by Harvard University to speak with aspiring student entrepreneurs.”

“Speaking at Harvard. Never thought it would happen, but through my passion for trading and educating, I made it a reality. Always believe.”

Wow, Jason Bond was invited by Harvard Business School to speak? What an honor! Such an amazing life achievement! He must really be something special! He must be the real deal. Have a look at the following video…

Well, I wasn’t convinced. So I then emailed and called Harvard University. I was referred to the Provost, a person named Alan Garber, Ph.D. Alan graduated from Harvard back in 1977. If anyone is officially invited to speak at Harvard, they must first receive permission from Dr. Garber, the Provost.

Unfortunately, the Provost of Harvard has never heard of any Jason Bond. Nor has Jason Bond ever received an official invitation to speak at Harvard. Ever.

Next, I was referred to Rick Calixto the Executive Director of the Harvard Trademark Program. Mr. Calixto oversees the office responsible for protecting and licensing Harvard’s trademarks throughout the world. When his office took a look at this promotional video…they didn’t seem very amused.

In a strange bit of delicious irony…please notice the “Veritas In Negotio” on the promo banner directly behind the head of Jason Bond. This is obviously a ‘knockoff’ of the real Harvard logo which contains only the word, “Veritas.”

What the Provost of Harvard found laughable and is that “Veritas In Negotio” translates from Latin to English as “The Truth Is Negotiable.” Whoever created the banner mistakenly believed that it translated to “Truth In Negotiation.” I guess they would call this a Freudian slip.

Whatever your own personal interpretation, the Provost of Harvard did not find any of this very entertaining. The Office of the Harvard Trade Program was also very interested in whatever else I could dig up.

And so I continued to dig. 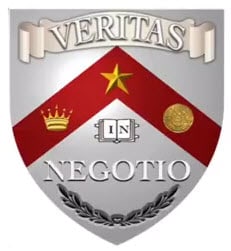 After digging around for a couple of weeks, I stumbled onto the character promoting this fake Harvard marketing gimmick.

So here is how this marketing gimmick actually works…

Once a year, this marketing character (he asked that I don’t use his real name) rents out a section of a restaurant located on the campus of Harvard University. Since he only has the room for a few hours, he quickly removes the dining tables and aligns the chairs together into what appears to be an official-looking presentation forum.

A video crew then quickly sets up lights and a portable stage. He then throws up the banner declaring, “The Truth is Negotiable.” And then fills the room with what I would describe as quacks, cranks, and charlatans. Basically, anyone looking for instant credibility and the perceived endorsement of Harvard University.

The character in charge of this fake Harvard endorsement calls this “H-Bomb Marketing.” And according to him, gullible people swallow this nonsense without a second thought.

Of course, I told him that I definitely wanted the official endorsement of Harvard University! And so he sent me a promotional flyer and an order form. Have a look at this beauty:

Isn’t this a hilarious thing? All of the people in the audience are filmed just like Jason Bond, all given 5 minutes to get up on the stage and act like Harvard invited them to speak. Instant Harvard credibility.

One of the guys in the picture was selling a ‘secret spice’ guaranteed to cure all sorts of physical ailments. Another guy was trying to pass himself off as an “Investment Banker to professional athletes.” Yet another was a selling an investment in a Mexican movie. The imagery is straight out of “coo-coo” town.

Ultimately, you need to make up your own decision on whether Jason Bond is the real deal or yet another day trading charlatan. In my opinion, there are as many red flags as the Russian navy.

And if someone were really earning millions of dollars each year, with what appears to be NO REPORTED LOSSES then why would they be selling these corny trading products and services? Its just not adding up. Sure sounds, “too good to be true.”

Thanks for reading. Don’t forget to leave a comment below. And if you have ever purchased any products from Jason Bond, would love to know things worked out for you.