Paul Scolardi is the not superman. As much as we attempted to pick him apart, we simply could not find any BS with this guy. A real super trader. He even looks like Clark Kent. Wait i must be the evil bald loser Lex Luther!  Remember boys and girls, I went to jail, so my opinion matters!

0 (0 votes)
Pros: Where else can you spend a small amount of money and watch a millionaire trader ply his trade? Having access is a privelage for anyone looking to learn and earn, yet willing to work hard.
Cons: Paul usually takes multiple positions in a stock, which can be hard to track and emulate. He also uses mental stops and mental profit areas. You are left to fend for yourself in this area, which is the only reason why I gave him a 3.5 user experience. Clearer exits would be beneficial.

Is Superman Trades Really So Super?

The following review is for superman trades, a day and swing trading advisory that specializes in stocks, and is managed by Paul Scolardi. I originally read about Paul Scolardi on Twitter in and about 2008. He seemed like a know it all pushing stories on stocks and preaching how awesome he was performing. I remember thinking that his posts were hot headed internet nonsense, classic stock trader puffery. About once a year, a random trader would send me a message asking if I had ever heard of a guy named Paul Sclolardi and that he calls himself Superman? That he trades stocks like a superhero and is selling an advisory type service. I remember thinking to myself, what sort douche bag would think so highly of himself that we would take upon the name of the worlds greatest superhero. Why did he have to steal superman’s name, why not come of with his own superhero name? Maybe something like Stock Picker Man, or Awesome Stocks Ninja Master, or Wall Street Wonder Women. Anyway, I didn’t take this guy seriously, not even one bit. Just another Internet loudmouth pushing his stock picks. I mean really, he was pushing out twitter posts proclaiming yet another $10,000 or $30,000 day, who believes this nonsense? And if he was making so much money, then why even bother selling a $200 a month advisory? It made no sense.

The Truth Begins To Emerge

In 2013, I noticed that i was still a loser, so i started this website. This guy  joined Investimonials and began reporting his live trades. What is Investimonials? It is a website where actual brokerage statements from TD Ameritrade and Interactive Brokers accounts can be submitted directly from the broker, and the information is culled out of a brokerage account and posted in all of its ugliness or awesomeness, for the entire world to see. No chicanery. Investimonials was a real game changer for the investment education industry because it exposed a lot of frauds, and also allowed the real traders to start receiving the respect that they deserved. And so, in Paul Scolardi’s case, I simply watched his trades for a few months. He trades in some obscure names, went both long and short, added to winning positions, added to losing positions, did not mess with penny stocks and stayed in the mainstream markets.  He was trading big stocks, little stocks, high volume and low volume, there was no apparent bias. He is not a Timothy Sykes type position trader that sniffs out penny stock pump and dump schemes and then specializes in shorting. No, Paul’s method was more mainstream. And so, in 2014 I decided to take the plunge and join the live trading room.

The trading room is moderated by Paul and a few of his protégées, whom have also proven themselves to be pretty good traders, as verified by trading statements. However, I was only interested in what Paul was trading, I just wanted to copy his trades and make money. I didn’t want to follow anyone else, just the guru. I found the room is to be well managed and in comparison to be quite lively and entertaining to ponder the day’s events. However, keep in mind, that I mainly screen record trading rooms. And I typically will have about 6 different computers all recording different trading rooms. My assistant will later go back into the raw footage and time stamp when trades were called for entry and for exit.

What we discovered with Paul is that he has three different types of trades. The first would be the classic news scalp. The second would be a chart pattern swing trade. And the third and most interesting would be the fundamental position trade. All three compliment each other quite nicely, but be aware that you have to be ready to quickly to pull the trigger quickly on the news scalps. A few trades, he was in and out very fast and sometimes had quickly banked over $10,000 in profit so quickly that I could hardly believe what I was seeing. The Second type of trade would be the chart pattern swing trades.

The chart pattern swing trades were interesting in that Paul would take a large position, and then he would add to the position. Even adding to a a losing position, which is counter intuitive and many would say is crazy, but Paul would add up to two additional positions on top of the original position. Some of these swing trades would last a few days. He would take a portion of profits, let it run and take more off, then attempt to take off the last portion on a parabolic move in his favor. He would use mental stops and not allow his big exit stop orders to be exposed to other trades. He would also say things like, “I will exit in this area” or “I will take a loss in this area”. This can be confusing and irritating for someone attempting to copy his trades. However, one cannot argue with the end result, and the end results are all verified. The guy just makes money.

The third and final type trade are Paul’s fundamental type trades. Understand the Paul is a former accountant and apparently won some corny award for best CFO in his state. Which is great, but hardly applicable to trading, or at least I thought. Apparently Paul finds it interesting to carouse thorough obscure SEC filings and balance sheets, looking for god knows what. He also uses some very odd news sources to gather information. On one particular trade, he referenced a Taiwanese news blog, which to me looked like an amateur attempt at reporting the news. I would never base a trade on such flimsy reporting. He even gets trade ideas from Newsmax, which is just a shit pool of nonsense and political propaganda. But whom and I to say what works? I remember reading that the famous trader, Victor Niederhoffer, that his favorite source for trading ideas came from the National Enquirer.

Results Are All That Matters 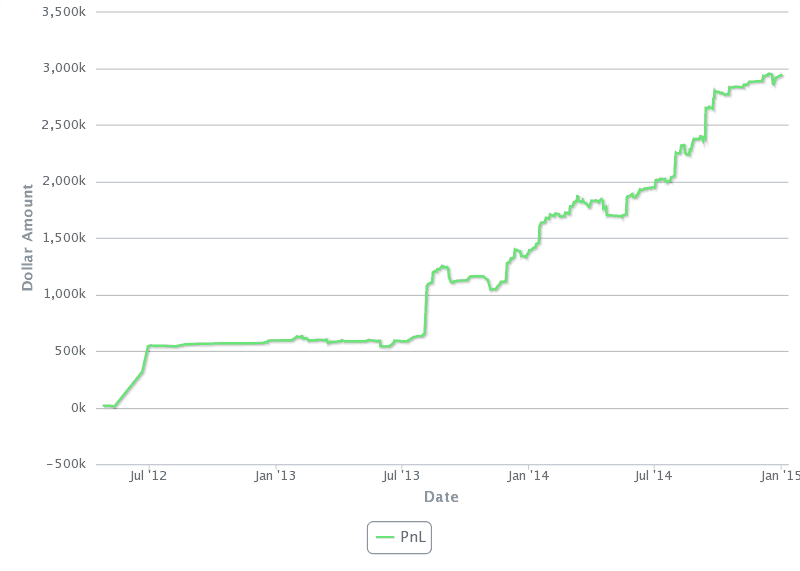 At the end of the day, the only thing that matters is performance. Opinions cannot feed your family. You have to take a position and then hope for good results. The bottom line is that we closely watched and live recorded Superman Trades for a full two months, and we followed his brokerage statement and twitter posts for an entire year. He made over $1,000,000 in 2014. An amazing feat. And definitely worthy of super status.

In my worthless opinion, the truest and most useful evaluation method is to jury the students. Sure, we know that Paul trades, and we know that he is an excellent trader. But he has been doing this for 17 years, can he teach us neophytes his methods. Can this fisherman teach us to fish?

Well, in early 2014, Paul sent out an email for his one and only live education course. Of course, it looked like every other course on the internet, all promising the riches of King Midas. You know exactly what I am talking about right? Anyway, I did not purchase. Now lets jump forward to November 2014 and Tim Sykes of Investimonials holds a conference in Las Vegas on investing in penny stocks. Paul Scolardi gave an hour speech which was highly entertaining. During the speech he revealed that several of those students that took the course back in January 2014 had all earned over $200,000 in profits trading Pauls methods.

Not only did I verify the students and their performance, but I also visited there personal blogs and found out their stories. I was amazed. Not because they were able to make a profit by following Paul’s trades, but because they had taken the base of what Paul had taught and come up with their own “special sauce”.

It is truly amazing when a trading educator proves his worth and ability to this degree, it is nearly a miracle that he is able to teach others his methods, and then turn the students into their own unique success stories. I have to take my hat off to you Paul, you truly are a superman trader.